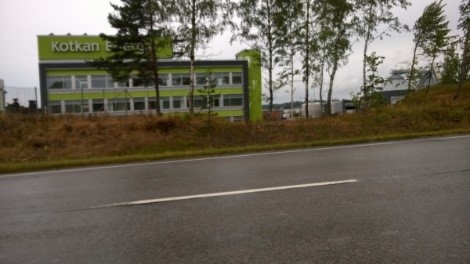 Kotkan Energia’s new premises at Hovinsaari were completed in July 2014. District heating, corporate and production services are now available from one and the same address.

The new building utilises solar power. Fifty solar panels are installed on the building and the electricity they produce is used entirely to meet the needs of the building’s equipment and devices. The solar panels produce and estimated 13,000 kWh per year of electrical power.

The property’s most significant energy consumption points and solar power production were placed under continuous monitoring, and approximately 30 energy meters were installed in the property to measure energy consumption by electricity, district heating and refrigeration. Solar energy production and water consumption are also metered. Most measurements are of electricity, and relate to HVAC devices, lighting and socket use on various floors, as well as to electric car charging. All energy meters are connected to a Siemens building automation system.

Nuuka Solutions supplied Kotkan Energia with a Nuuka BEMS to monitor and report on the building’s energy efficiency.  The Nuuka BEMS reads data from approximately 30 energy and water meters from the Siemens automation system via the BACnet protocol and exports the data to Nuuka’s online service.  Nuuka uses the measurements to generate an energy efficiency report and calculate the KPI key figures for energy efficiency for various types of energy, water, their costs and CO2 emissions.

Using Nuuka’s energy analysis tools, the property’s HVAC and electricity processes can be optimized in the early stages, with continuous monitoring ensuring that any exceptions are identified immediately if they occur.

The implementation was designed in cooperation between Kotkan Energia and Nuuka Solutions.

The system was taken into use in September 2014.

Big data and analytics at the Annual Convention of Property Investment Prospects in Aulanko 6.-7.11.2014. »